BSP announced lately that the old Philippine peso bills will expire in 2016. This means that the New Generation Banknotes introduced in December 2010 that have enhanced security features , will be in circulation as the single currency series in the Philippines. 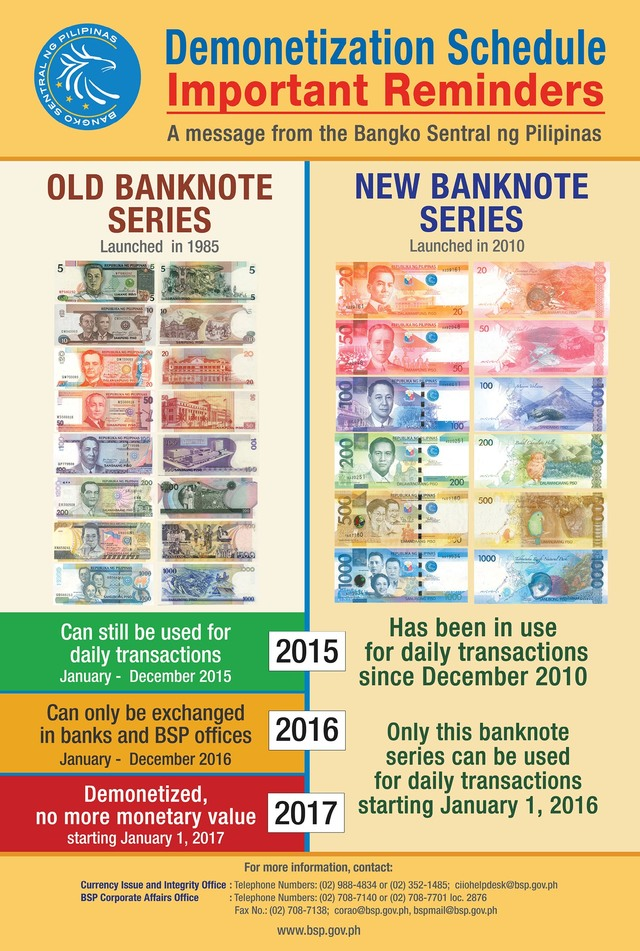 2. From January 1, 2016 up to December 31 2016, the Filipino public may exchange the old banknote series in authorized financial institutions like universal and commercial banks, thrift banks, rural banks and cooperative banks as well.

3. Government institutions holding old banknote series or old Philippine peso bills are required to file a request in BSP Cash Department in writing, within the period of exchange, for a special exchange arrangement.

4. For OFWs abroad who are still in posession of old banknote series and cannot exchange within the given timeline, may register online starting from October 1, 2016 up to December 31, 2016. They can exchange the old Philippine peso bills in the Philippines thru BSP within one year after the registration.

5. Starting January 1, 2017, the old banknotes that have not been exchanged shall no longer have any monetary value, and are considered demonetized.

This process of demonitization is accorded with the provisions of Section 57 of Republic Act No. 7653, also known as the New Central Bank Act, that authorizes BSP in replacing banknotes that are more than 5 years old.The old banknotes have been in circulation for 3 decades.

I hope this has been informative. Cheers!