Today, I wanna share another beautiful and inspirational story taken from the Cashflow Quadrant book written by Robert Kiyosaki. It’s called “building a pipeline to wealth“. If you haven’t heard or read Cashflow Quadrant yet, I recommend reading it ‘coz you’ll learn more lessons on that book.

Basically it tells that the income of an individual came from four quadrants which are E – Employee, S – Self-employed, B – Business owner and I – Investor. 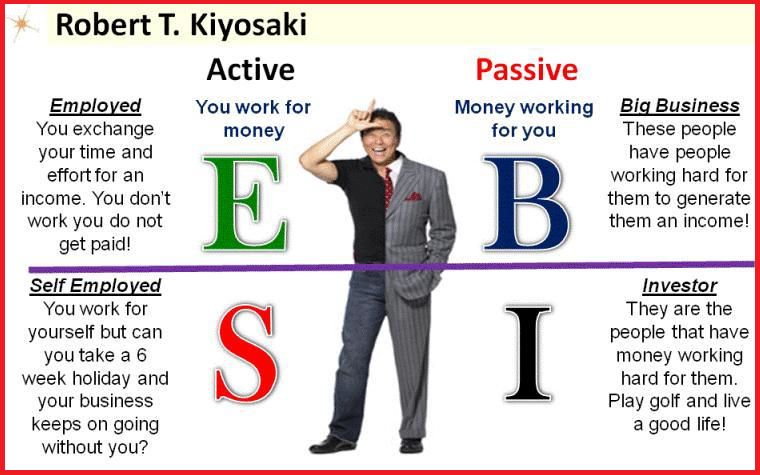 And the cashflow quadrant story of building pipeline to wealth goes like this.

Once upon a time there was this quaint little village. It was a great place to live except for one problem. The village had no water unless it rained.

To solve this problem once and for all, the village elders decided to put out to bid the contract to have water delivered to the village on a daily basis.

Two people volunteered to take on the task and the elders awarded the contract to both of them. They felt that a little competition would keep prices low and ensure a backup supply of water.

The first of the two people, Ed, immediately ran out, bought two galvanized steel buckets and began running back and forth along the trail to the lake which was a mile away.

He immediately began making money as he labored morning to dusk hauling water from the lake with his two buckets. He would empty them into the large concrete holding tank the village had built.

Each morning he had to get up before the rest of the village awoke to make sure there was enough water for the village when it wanted it. It was hard work, but he was very happy to be making money and for having one of the two exclusive contracts for this business.

The second winning contractor, Bill, disappeared for a while. He was not seen for months, which made Ed very happy since he had no competition. Ed was making all the money.

Instead of buying two buckets to compete with Ed, Bill had written a business plan, created a corporation, found four investors, employed a president to do the work, and returned six months later with a construction crew.

Within a year his team had built a large volume stainless steel pipeline, which connected the village to the lake.

At the grand opening celebration, Bill announced that his water was cleaner than Ed’s water. Bill knew that there had been complaints about dirt in Ed’s water.

Bill also announced that he could supply the village with water 24 hours a day, seven days a week. Ed could only deliver water on the weekdays. He did not work on weekends.

Then Bill announced that he would charge 75% less than Ed did for this higher quality and more reliable source of water. The village cheered and ran immediately for the faucet at the end of Bill’s pipeline.

In order to compete, Ed immediately lowered his rates by 75%, bought two more buckets, added covers to his buckets, and began hauling four buckets each trip. In order to provide better service, he hired his two sons to give him a hand for the night shift and on weekends.

When his boys went off to college, he said to them, “Hurry back because someday this business will belong to you.” For some reason, after college, his two sons never returned. Eventually Ed had employees and union problems. The union was demanding higher wages, better benefits, and wanted its members to only haul one bucket at a time.

Bill, on the other hand, realized that if this village needed water, then other villages must need water too. He rewrote his business plan and went off to sell his high speed, high volume, and low cost, clean water delivery system to villages throughout the world.

He only makes a penny per bucket of water delivered, but he delivers billions of buckets of water, and all that money pours into his bank account. Bill had developed a pipeline to deliver money to himself as well as water to the villages.

Bill lived happily ever after, and Ed worked hard for the rest of his life and had financial problems forever after.

Like the story of the begging bowl, that’s another inspiring and valuable story right? That tell and show us how employee and self-employed individual thinks vs. business owner and investor mindset. That shares how working hard vs. working smart provide different results. And more importantly it shows how we can achieve financial freedom by building businesses that solves people’s problem. By providing sustainable solution and improving other people’s lives.

Did you read the book? What’s your take on it? On the coming weeks, I’ll share more lessons I got from the book. You can also share yours on the comment section below.

I hope you learn something from this article and this has been inspirational. Until next time, cheers!